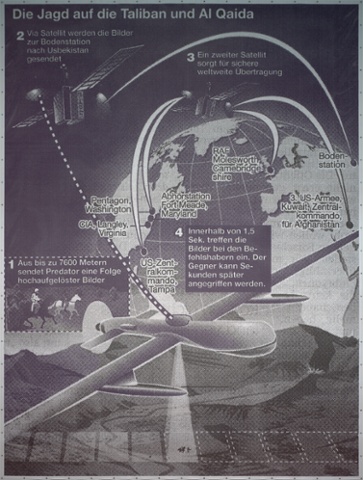 Our world is in crisis and we have no idea how to confront it. We are groping in the dark, often alone in our concern. The radical groups that gather to organize are small, timid, and fleeting. Noncommittal. Meanwhile, the terror grows. Massive NATO wargames in the Baltic. Fascists on the march in Europe, Asia, the Middle East, South and Central America. Here, even, in the United States; widespread anti-immigration and chauvinist sentiment, millions of economic refugees coupled with worsening conditions for all of us: decaying infrastructure, a welfare state hacked to pieces, the evaporation of jobs that pay a living wage. And the rich get richer, of course, but what else? The left, the actual last vestiges of the left worldwide, is being wiped out. Red activists thrown from windows or chased underground, into hiding. Assassinations in Greece, the dismantling of the PFLP in Palestine, a possible final assault against the Naxalites in India, raids of activists houses, arrests, disappearances. Mass incarceration in the imperial core. Extralegal prisons and kill lists. Weaponized, remote controlled airplanes, deployed in dozens of countries. Massive foundations run by billionaires such as Bill Gates wreck the people of the global south, destroying infrastructure and forcibly sterilizing and killing women and girls as test subjects and foreign markets for poison. The KKK is arming itself. These things are happening; the situation isn’t comparable to any other we have faced.  Chemical weapons, poisoned food and water, a planet that is crumbling around us. There is also the surveillance state, ever-present in our homes, our pockets: all of our data, photos, communications, purchases, deepest secrets, now all cataloged and ready to be used against us. And the protest movements in the West seem more determined to overthrow foreign governments targeted by US-NATO than to overthrow capitalism.

So when I start to speak about conspiracy here, about propaganda, psyops and intelligence, I hope you will cut me some slack. We have to admit that there is a ruling class, that its purpose on this planet is to accumulate more capital at the expense of the workers. As we have seen, they will do anything to ensure this. They will rape, murder, plunder, lie, cheat, steal, whatever. We should be able to agree on this before proceeding.

To connect the worsening situation abroad to the one at home is risky business, because it is something that has strong potential to heighten political consciousness and rally the people. The United States is not going to willingly let go of its power worldwide. Fascism is capitalism in crisis. When we can no longer be controlled by our more basic needs and desires, fascism comes along to make every space hostile towards organizing against the capitalist state. It can contain popular resistance on a very micro-level. Walking outside and seeing that everyone already has you in their sights will check your behavior. So too will thinking somewhere in the back of your head that your communications are being monitored or at least stored somewhere, if not by the government, then by Google or your bank.

So maybe this is part of the reason why nobody shows up to meetings, or if to meetings, then not to street action. After all, despite this growing sense of urgency and fear in our stomachs, the media assure us that all is relatively well. Even the leaks about our surveillance program are meted out in bite-sized chunks, celebrated with much fanfare, rolled out with showman style. We go home and scratch our heads as nothing happens – what did all of those fireworks really mean? Like “Big Brother is Watching You” signs, we are being told quite frankly that our communications are monitored. What is missing from the leaks is our new COINTELPRO. But we know the cops are busy. We know mercenaries are all the rage nowadays, and corporate spies as well, so why even just constrain ourselves to the CIA and FBI? When there is a crackdown, we should be ready. And we should be aware that a crackdown is coming. It doesn’t matter how ineffectual or small the Left might be, we will see a crackdown anyway – that’s how this works.

So why are we giggling when there is a panel at Left Forum called “Zizek must be destroyed“? The facts are clear. Molly Klein invites us to consider the possibility that the Left is being targeted for infiltration and destruction. Is that so much to ask? I heard someone walk out of the panel huffing, “Well, I know Zizek is a racist, but that’s just crazy.” Are you kidding me? If Zizek is a racist, if he supports ethnic cleansing, if he sides 100% of the time with an imperialist agenda, if he spends much of his efforts presenting a grotesque caricature of a “Marxist” and misattributing Goebbels quotes to actual revolutionary Marxists, shouldn’t we be concerned? Apparently, a time of dark reaction such as this is the wrong time to consider the possibility.

Likewise, if a woman who has taken money from some of the more powerful foreign-policy shapers on the stage today – Al Jazeera, Open Society, Freedom House, New America Foundation – suddenly decides, 24 hours after the first decent anti-imperialist article has run in Jacobin magazine, to slander all the masthead and yes, even the “Left” itself, with allegations of supporting rape, shouldn’t we pause and think on that? Considering our circumstances, shouldn’t we at least consider the possibility? When national security advisors and contractors start to chime in, isn’t that weird? Molly Crabapple, a cheerleader for NATO intervention on many fronts, also participates in this labeling of the Left as rapist and misogynist (if not just jealous of her success). Of course, this is a woman who receives all-expenses paid trips to Guantanamo Bay and forgets to mention the murder and torture coverups covered in Harper’s, and whose partner and room mate (Fred Harper, pictured) is quite literally an Army propagandist. Taking these sorts of people into our conversations on good faith is the same as allowing an oil-industry showman to enter the debate on climate change – they have a vested interest in obscuring the truth, which they do. They are not revolutionaries. Their place here is too comfortable, too dependent on the status quo. We must not forget that the ruling class does not value honest debate – there are millions of dead bodies that can testify to this – and they will only enter into it when they see a tactical advantage.

I have a hefty bag full of complaints about the Jacobin “Brand” and its DSA style publication, its political posturing and its entrepreneurial propaganda, it’s misogynist mishaps and its unreliable grasp of history, but even I cannot help but notice it’s sometimes the best we’ve got in terms of widespread organization and messaging. And so, if someone comes punching left, I’ll take the opportunity to throw myself behind a party I don’t feel so hot about, because I realize the fash are coming. We have to hold the line until we get our act together.

It’s necessary to buy time and space while harrying the enemy: US-NATO imperialism, capitalism and its disciplining of resistance. I wish people would stop seeing this as a battle of egos and leadership positions – leader of what, really? – and instead come at this like we need communism yesterday. We need an end to imperialism now. We need this system yanked from the walls and we need the people of this world, this planet itself, to survive until we can get our acts together. So we shouldn’t take part in these games, and we shouldn’t be seduced into thinking we can all get tenured positions and six figure book deals. The folks with the tenured positions and six figure book deals have them for a reason, and it sure ain’t because they have a strong line on anti-imperialism.

Assess our global and local situation with a rational mind, as if you’re looking back, reading up on it in a history book. Divorce yourself from the equation. If someone suggests something that sounds conspiratorial, don’t laugh. Listen and learn. Even the craziest person speaks some degree of truth. Realize that the enemy’s technological capabilities are almost beyond imagination. Remember that our government is a pay-to-play system. Recognize that the planet and its lower 85% are stewing in pain and misery. Just because the television and internet say that our situation is mostly a bed of roses doesn’t mean it actually is. That’s propaganda. To get on stage and speak the truth would not get you killed necessarily, but it will get you laughed off, shut down and shunned.

Someone claims they think their calls are being monitored, they take their battery out of their phone when they talk to you. This will earn you oh really? smiles. To suggest that Zizek is a part of a greater imperial project and attack against the Left will earn you laughter and nasty drooling from old rich men. To suggest that a sudden, vicious attack against Jacobin magazine (after they published their first solid anti-imperialist article might I add! Good show.) that possibly more than a million viewers read is possibly a coordinated operation is going to make people embarrassed to be seen with you. But hey, considering the fact that Leftist youth are being kidnapped, assassinated, murdered, physically and mentally intimidated worldwide right now, while pretty much ALL other youth is further immiserated, unable to focus on much more but a livelihood, maybe it’s actually not so much of a stretch to think there may be those with less than helpful agendas among us? And to consider that the FBI regularly entraps vulnerable or mentally ill Muslims, targets antiwar and peace activists, prosecutes disaffected youth more stringently than rightwing terrorists, makes it clear an organized crackdown does not need to be legitimated by an organized threat.

And yes, as a young red, you actually have a great deal of responsibility and opportunity to fix this situation. But first and most importantly, properly situation yourself within history and your current environmental conditions. This includes taking full stock of what’s around you, what could be happening. We should operate fearlessly as much as we can while realizing that yes, we will be subject to pressures for doing so. What is most important, though, is to have each other’s backs. We have disagreements about all sorts of things, but when the fash is bearing down on us, I’m going to put off my sectarian arguments  until we’re in the clear. When I see them punching left, I will punch right. When they punch down, I will punch up. It’s the least I can do to hold the line under such conditions.