I never liked being tickled as a child. Someone was eliciting a response from me that was not 100% genuine and was completely beyond my control. It wasn’t until I was older that I realized this happened all the time. When you walk out of a movie crying, you’re feeling something completely manufactured and often cheap. I didn’t like horror movies because it seemed so manipulative. I enjoy film and music that makes me feel something, but I prefer to have control over my emotion. A song might make me feel happy and think of a loved one, or a film might fill me with a kind of dread that I can reflect on in my own life. I hated Passion of the Christ because it took a story so integral to the Western experience – the story of Jesus of Nazareth being crucified – and turned it into a cheap kind of horror film. Without exploring the messages behind Jesus’s life or feeling the impact of the sacrifice (according to Christianity) we were simply disgusted and horrified by CGI chunks of flesh flying off the Roman’s cat-o-nine tails and the seemingly endless rivers of blood pouring down the face of Jesus. It’s like pornography, I thought. I’m just supposed to be feeling something… not for any reason, not to change my mind about something, but just to feel something. I felt like using Jesus as the vehicle for this kind of elicitation was cheap. After all, the Christian story of Jesus is so deep, so laden in mystery and humanity, that to boil it down to weeping audience members, vomiting children… it all seemed so besides the point.

Likewise, when I visited Yad Vashem yesterday I felt that since the presentation of the Holocaust was so manipulated, I should be as critical as possible to do honor to the subject. Nevermind the fact I was aware of the political situation outside of the walls and had just come from a checkpoint with automatic weapons, barbed wire, and endless swaths of concrete. Nothing can compare to the horrifying nature of the Holocaust, as man’s technology finally advanced to the point where we could make killing factories and machines, an entire mechanized industry out of eradicating human life mirroring some sort of industrialized assembly line. Yet what am I supposed to feel when I am walking through Yad Vashem? 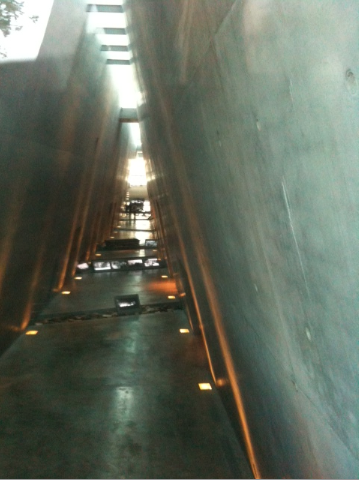 The building itself is remarkable – poured concrete and little light – and the exhibits are created so one is forced to step back and look up. Your first introduction to the story is antisemitism. Christianity is blamed for its spiritual creation – complete with quotes from St. Augustine – and its biological and racial roots are traced to the 19th century. We are then told in brief and in passing that Nazi antisemitism was somewhat of an economic thing, that the Europeans were jealous of the Jewish people’s accumulated wealth in a time of poverty. This is the end of explanation and by the time you exit the first room of the museum there is no more explanation necessary and you are instead launched into an orgy of emotion. 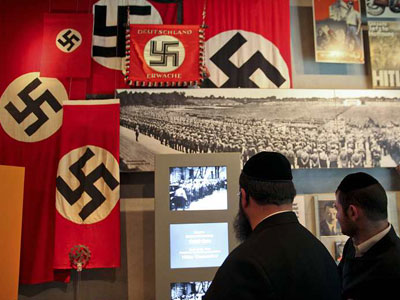 When we look at locks of a little girl’s hair, of toothbrushes, family heirlooms, tefillin, and shoes in the floor, what is it we are supposed to feel? Miniature pewter models of death camps Treblinka, Sobibor, Majdanek… plaster models of the gas chambers at Auschwitz complete with writhing bodies suffocating in agony. Here: stand next to a bunk or walk on cobblestones from the Warsaw ghetto. How does this make you feel? Is it not enough? Perhaps photographs of naked women huddled before a pit of bodies, a wide eyed man sitting on the edge of a pit with a gun to his head. The video display of an old woman describing in broken Hebrew her experience clawing through dead bodies after the bullet missed her. The culmination is a red-cheeked fat American woman sitting down and shouting to her companions that she is going to be sick.

So you’ve elicited the response, now what? Besides the lack of the word “Palestine” anywhere in the Museum, the only outwardly Zionist gesture comes at the end, when you are standing before the placid hills of West Jerusalem, the sun setting behind them in a wonderful way. Perhaps the motive is in the glorification of Jewish resistance fighters near the end, the rehabilitation of the “sheep to the slaughter” image you might have cultivated until this point. Who knows what it is? I walked through taking notes as photography was not allowed, but even I had to put away my notebook eventually as the bile rose in my throat and my cheeks burned pink. 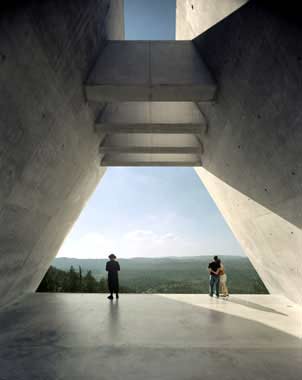 Yet I felt silly. After all, little of this had anything to do with me. That American woman feeling faint and needing to sit down – chances are it had little to nothing to do with her either. Guides took through their American charges, whispering in low tones, “You know, I heard this one story about a man in America who realized he was living next to a Nazi.. did you know Europe and America took in Nazis?”

No one can deny the scale. No one can deny the uniqueness of the Holocaust. Yet the stated cause behind it – the racial motivations of the Nazi party as opposed to capital, war, etc… the thinking part is shelved and the emotional part is coaxed out instead. If the goal is to “never forget” – well, who would be in Israel and forget the Holocaust? If it is a memorial to the victims and their humanity, why the photographs of naked children in medical experiments? So then why Yad Vashem, why in Jerusalem, why such a presentation and display? It was a strange museum to human evil and yet offered little in the way of solutions or even reconciliation. The only real emotions to be felt there were anger and burning shame.

The mass nature of wartime death is useful in many ways. It serves as a spectacle, as diversion from the real movements of the War. It provides raw material to be recorded into History, so that children may be taught History as sequences of violence, battle after battle, and be more prepared for the adult world. Best of all, mass death’s a stimulus to just ordinary folks, little fellows, to try ‘n’ grab a piece of that Pie while they’re still here to gobble it up. The true war is a celebration of markets.