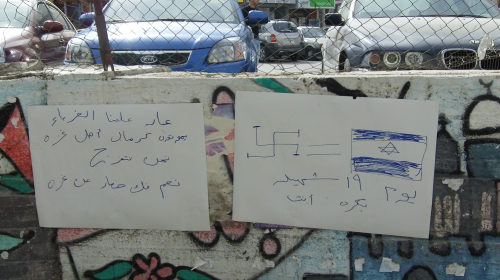 First the flotilla victims were IHH (which was suddenly a radical Islamic terrorist organization) and then they were just simply Hamas/Terrorists. First the international protesters were simply uninformed, now they’re Islamic extremists/sympathizers. First the Israelis were going to “deliver” humanitarian aid (see Amira Hass’s views on this one here) and now the Israelis claim  up to 50 on the ship “could have terrorist connections with global jihad-affiliated groups”. I guess if the flotilla was such a publicity stunt, like Israel keeps claiming, they would have taken care to not pack night vision goggles and bulletproof vests (which today you can’t find a source for) and admit terrorists to their ranks, right?

If you can’t see through this I don’t know what to tell you. Israel boarded a ship in international waters (piracy) and killed unarmed civilians with head shots (murder/warcrime) because they are so desperate to keep their Gazan prison tight and secure and starving and hopelesss.

Even though Turkey is talking tough, my guess is that next Israel will be blaming Lebanon. I honestly don’t know at this point. They’re going to keep sending ships and Israel says next time they’ll use “more force”, as if killing up to 20 unarmed civilians  isn’t enough. Turkey threatens to escort the next flotilla with their navy, but we’ll see how NATO responds. Meanwhile, the United States couldn’t be bothered to respond with any kind of indignation past “deep condolences” for the families affected. Business as usual.